They say times flies. This idiom was first recorded about 1800 but Shakespeare used a similar phrase, “the swiftest hours, as they flew,” as did Alexander Pope, “swift fly the years.” When I realized that it’s been more than a year since my last post I ask myself, where did the time go? What have I been doing all the last year?

Well, it’s time to change that.

It’s February 2019, I will try to post more frequently. My goal is to write about the art I see and that talks to me, at least once a month.

A few weeks ago I made a list and headed down to Chelsea. I wanted to see the new works by Lynette Yiadom-Boake, an artist I discovered a few years ago at the art fair in Chicago. She was born in London, won a few prizes and is included in numerous institutional collections. The images in her paintings are pure imagination; she studies old paintings and lets her brush tell the story.

This show is called “In Lieu Of A Louder Love”. There is a poem which she wrote that might shed light on the images.

In Lieu Of A Louder Love

In the Shade of Hooded Cove,

In Debt to the Dead Oak.

In Range of a Twelve Gauge,

On Embers over Smoke.

At Pains to Hold the Wanton,

At Home to all who Knock.

At Prayer on Prickly Hearth Rug,

An Eye upon the Clock.

In the Parlance of the Pilgrim,

In Hallelujah Coat and Tie.

In Soul so Black Beguiling,

That the Ravens do Carp and Cry.

In Memory of A Cipher,

At Peace beside resting Dove.

In Light of Care and Kindness,

In Lieu of A Louder Love. 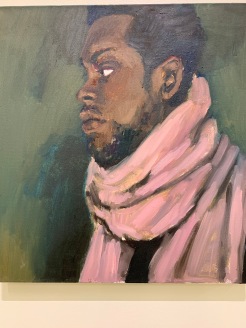 My next stop was at Mitchell-Innes & Nash.  What caught my eye was the detailed drawings of LA artist Karl Haendel.  The images draw from American life. You can see a portrait of Barbara Walters, a stack of lawnmowers, an American eagle and football players in a huddle. The common tread that links these images is the dialogue between memory, both personal and collective, and national identity. The artist gives his own interpretation and presents us with an alternate American reality. 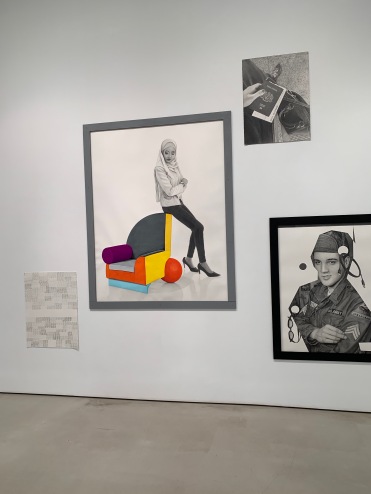 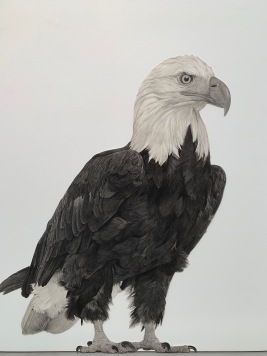 Across the street I walked into James Cohen gallery to see the show ” Borders”.

It is a powerful show. A group exhibition that considers how contemporary artists engage in politics, ideology and formal borders. The exhibit seek to create a dialogue about borders both as a productive exchange and as a barrier.

I found some of my favorites artists: Yael Bartana; an Israeli pioneer black and white photo., although the photo is titled;The missing negatives of the Sonnenfeld Collection, https://www.bh.org.il/databases/visual-documentation/photo-collections/.                    Yinka Shonibare ; American Library. Shonibare uses African textiles to create books. The spines are  embossed in gold with names of American politicians who are first and second generation immigrants. Jordan Nassar, a Palestinian-American artist who uses tradition Palestinian embroidery in his abstract works. There is a nostalgic feeling to these works. Between the stitches one senses his desire for a peaceful resolution to the conflict between the Israelis and Palestinians. Dead Scott who imagines a world without America. A world without boundaries or borders.

“Imagine a World without America” was originally designed for and displayed as a panel of Mark di Suvero/Rikrit TIravanija’s Peace Tower at the 2006 Whitney Biennial. Subsequently it has been printed as a large print on canvas as well as a smaller version on paper.

As I was walking home I passed a Mark Di Suvero sculpture called Hugs.

Maybe it is a fitting ending to this first post of the year, sending hugs to all who are reading this.