“It’s April and although they say:”April showers brings May flowers” the sky is grey and it is hard to believe that we will ever get some sun and that the buds will come out from the frozen ground.  To lift me out of my melancholic mood it was time to find some art that will bring flowers into the world.   The Brooklyn Museum has two great shows: “Kehinde Whiley” show which is called “A New Republic” and Basque’s “The Unknown notebook”.

It’s April 2016, and you’d think nothing changed.  It’s like in the movie, “Groundhog Day”. Each April we think the weather will warm up but NOOOOO, we need a winter coat when venturing outdoors. Storm King sculpture park opens its door April 6th as one of the signs of change. Like daffodils coming from the ground.

Museums open the season with interesting shows. The Met at Bauer which opened at the “old” Whitney building with a show called “Unfinished”. It’s an historical review of works that the artist left deliberately unfinished  or let us the viewer decide left to our imagination.

Michelangelo work is divine, the image is so angelic.

Andy Warhol leaves us wondering whether we will get a complete guitar image if we just follow the numbers. 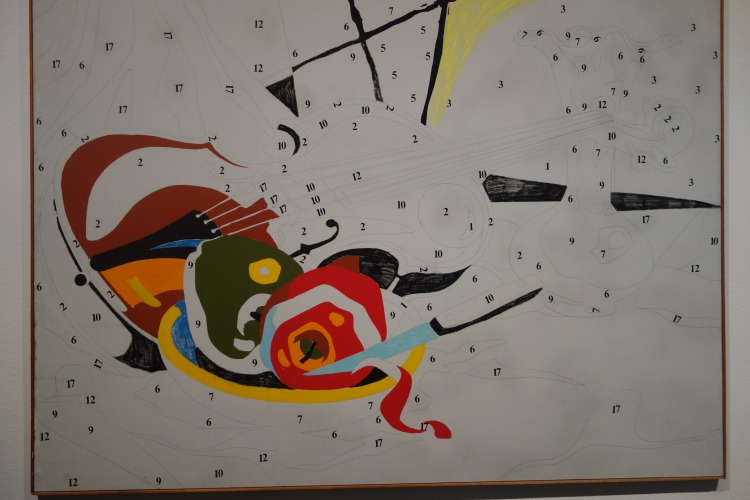 Picasso lets us wonder if his painting of man gazing at a semi nude  model is indeed a partial work or he really intended it to be partly penciled in and to think the it was painted on a dish towel.

Degas is familiar with his ballerinas but he is a master using a monotype print technique. We can see the phases of the work, first it’s the black and white drawing and then the adding of color. Degas made these monotypes in 1818 as a way of searching for a new way to capture new life. You can see that what’s important is the process of innovation and less the finished product.

The other artist that is  having a retrospective and  was unfamiliar to me is :

Marcel Broodthaers: A Retrospective. A “forest” of palm trees welcomes the viewer. Marcel is Belgian. He takes us through his mind and gives us a glimpse at his thoughts. His works were created at the time when other artists did Pop and Minimalistic Art. He turns to poetry and ask “what is art?”. His answer is whimsical and playful. He plays with modules/eggs as objects that hide something. He pays homage to Magritte’s pipe and the folk tale of the raven and the fox. He created an installation that one feels like walking into the fable, surrounded by the words that describe it. He continues creating his own museum. His art is apolitical and poetic. A must see. 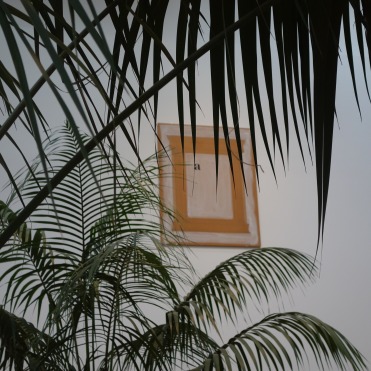 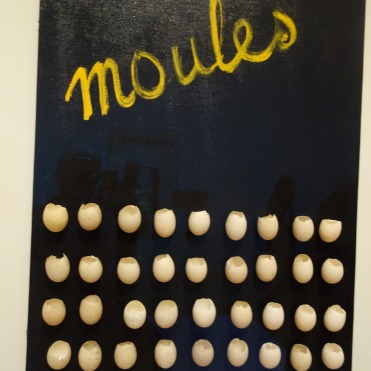 The Jewish Museum brings lots of color in the form of Isaac Mizrahi: An Unruly History; Isaac Mizrahi fashion designs from the 70’s and 80’s. One can imagine wearing these today. His fabric boards which welcome the visitor let us enter his world and we can feel as though we might be designing the fabric. 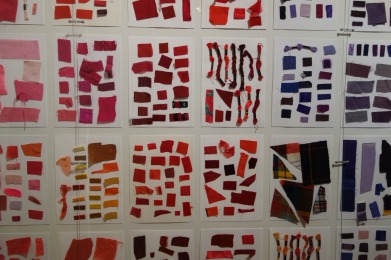 The weather continues to play tricks on me. The sun is out but you still need to wear a winter coat and add a scarf and gloves. Next I will be walking in and out of the galleries in Chelsea so hopefully it will get warmer…