I am sitting at the  airport waiting for a flight to Israel reflecting on last week art exploration. I will miss the Armory show but i know I will see some art on my travels.

A weeek ago it was raining, sitting at home was not an option but seeing the show that just opened at the Guggenheim Museum was the thing to do.

It’s a show by two artists who collaborated together over 30 years. It’s really a retrospective by the Swiss artists Peter Fisceli and David Weiss. They use the alter ego of a rat and bear. One is ugly and one is cuddly. Their work spans multi disciplines. You can find incredible videos, sculptures of basic shapes like a circle or drawing with words that describe the world from their eyes. On the third floor there is a display of duo sculptures  which describe opposites emotions  as sad and happy, high and low and more. One feels like one is walking into the mind of the artists.

It is an unusual retrospective as the work is not set in a chronological order. One feels like an explorer and can be part of the creation of the art. 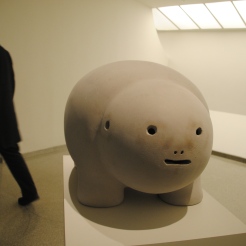 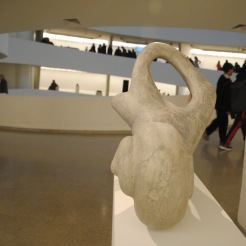 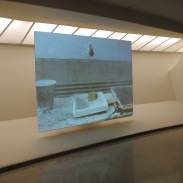 Next I chose to explore some exhibits in Chelsea. Here is what I was able to see within two hours.

Paul Kashmir Gallery on 515 west 27 had a show of Kenneth Nolan, bright colors, not so exciting. I think the show closed and he is showing some new artist.

Fredericks & Freiser Gallery on 24th street has a group show. Mostly it’s bright colors and geometric shapes. One artist in particular caught my eye; Cary Smith. I have seen his work at the Aldrich Museum, his work is  refreshing and it  makes me happy just think of it.

On the same Street, a few galleries east, Jack Shainman Gallery is showing a South African artist name Claudette Schreuders.  The sculptures are great but the lithographs are even better and  are actually affordable.

I will  have to go back to pick one.

Off to 20th street, the Jack Shainman second gallery which is really his first, has a show of three artists; El Anatsui with his metal scrap pieces that creates a carpet, Bernd and Hila Becher show their series of  water tower photographs and Maya Lin who designed the Vietnam memorial with sculptures and video that’s called “What is Missing”.  This group show is called “Of a Different Nature”. Each of these artists is great on his/her own.

My next stop was at David Zwirner Gallery. You have to take off your shoes and enter the mystical, magic world of Doug Wheeler. A play with fluorescent light. You can see the relations between light and space. It’s called “Encasements”.

To finish the day I stopped at Sikkema Jenkins Gallery on 22nd street to see the Amy Silman show. She had a retrospective a few years ago at the Boston Museum but here we see some familiar work and as well as some new and exciting pieces.

Five days in Israel, I had to check what’s new at the Tel Aviv Museum. I saw an amazing exhibit by the prolific, complicated artist Roee Rosen. It a survey of his works but this was not clear when you enter the exhibit.  There are four portraits and names of artists and I assumed that these are artists that Roee was inspired or influenced by. I asked myself whether he curated his own show or maybe some are his works and wondered, is so, which ones? Well, after spending two hours between the works that touched on different mediums: video, painting, writing, photography and the printed book I was still not clear whose work I was experiencing. Honestly I was confused, something did not compute. On further research I realized that my assumption was all wrong. Roee invents characters and creates body of work for them so Justin Frank, Maxim Komian, Mishkin are all Roee. The work “A virtual Journey through Eva Braun’s Eyes” is all from Roee’s own imagination.

He is either a genius or has multiple personalities, or maybe both… I will leave it to my psychology friends to analysis.

I think this show is a must-see but needs time to understand  the complexity of the work.

In the past few years I have started to work with clay so when I saw the display in the basement of the museum of what looked like a potter’s workshop I was drawn to explore.

Ben Hagari video of pottery starts with him making a vessel on a wheel. You only see hands, then the artist covers himself with clay and moves slowly towards the fire… while a snake crawls on him. The movements of creating the pot and the snake slithering seem to be in rhythm. It is amazing.

I find it interesting that the two shows; Peter Fisceli and David Weiss at the Guggenheim and Roee Rosen at the Tel Aviv Museum, although continents apart are both complex body of work by very creative prolific artists.